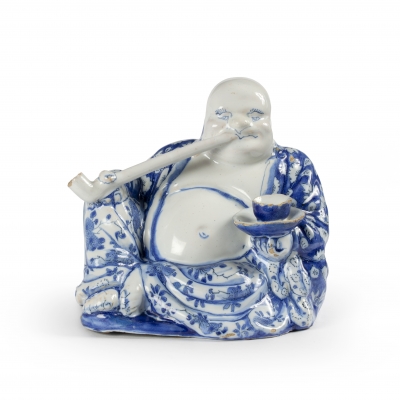 The smiling Buddha is the nickname of the Zen Master Budai Heshang (Poo-Tai Ho-Shang) who is known as a Buddhist philosopher. He is also called 'Chinese Buddha', 'Laughing Buddha' or 'Fat Belly Buddha'. Poe Tai or Heshang. He is often depicted as a bald man with a big belly, always with a cheerful smile, his long earrings indicate an aristocratic descent. The attributes are very different and symbolic, these are among others.
Beaded necklace (Mala): Buddhist prayer necklace.
Gold Nugget: Symbol for financial happiness.
Children: Symbol of fertility (That can also be fertility in a relationship or looking for a job)
A bag: Symbol of searching and traveling (searching for yourself) With a bird: Symbol for self-knowledge.
Peach: Symbol of solidarity.
Pearl: Symbol of health and beauty.
Careless and completely happy, he wandered through China, often surrounded by children. After his death he was honoured as a folk hero, fertility god and bringer of happiness. And as such he still roams the world, as a tangible image of the carefree bliss that is shared by everyone who has found his own true nature, "The Buddha in himself".
He is usually given as a gift to close friends or family. His image is always in a room with his face to the door, so that everyone who enters this room is welcomed. It is also said in the west that it would bring bad luck if you would buy this Buddha for yourself, but this is a fable made up in Europe.
The Chinese laughing Buddha (other names: Happy Buddha or Fat-bellied Buddha) is actually not a real Buddha. The man referred to here was a Chinese philosopher named Poe Tai Ho Shang. He is often called by people who need money urgently. He is also known for his enormous sympathy, especially with regard to children. The meaning of his name is: mercy, kindness or goodness. He is a symbol of eternal happiness and he provides prosperity, wealth, good news, happiness and peace. He is therefore ideal to give as a gift to someone. It is said that if you rub his fat belly several times a day, you increase the chance of receiving a big fortune.
However, the attributes of this Buddha are not Chinese but European. It is therefore not a Chinese, but a Delft Buddha that has undoubtedly been made after a Chinese Blanc de Chine example. The modeller, however, has applied the Dutch ideas about the Chinese and unwittingly wanted to give him a more exotic look with a pipe and tea.
These figures are rare in Delft earthenware. They were pressed in moulds and made in this way. Therefore, the remaining copies resemble each other closely in shape and size. Only in the decoration surprising differences can be found.
Such laughing buddhas were also made at other factories such as De Metaale pot under Lambertus van Eenhoorn. Polychrome decorated buddhas were also produced at the beginning of the eighteenth century. 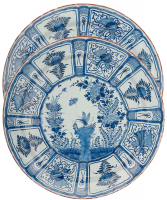 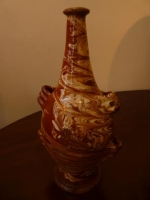