The Atmos does not provide much energy, so JLC was challenged by adding another complication. The R&D department tweaked the movement to reduce any loss of energy or friction. The result of their efforts is the Caliber 566, which drives not only the equation of time and a month indicator, but also a rotating disk that presents a current view of the ever-changing constellations in the night sky above the Northern Hemisphere.

The Atmos Astronomique, which Jaeger-LeCoultre features a design based on the 1934 CH1, a clock with glass panels on each side. The two panels on the Astronomique are etched with fragments of sky maps from Harmonia Macrocosmica, a 1660 cosmographic atlas published by mathematician and cartographer Andreas Cellarius. This celestial theme inspired Jaeger-LeCoultre to devise the new movement to reflect the imagery, as well as the universal and perpetual aspect of time as represented by Atmos. The original creation was the most complicated part, because it was difficult to realize the perpetual movement, and adding complications to what appears to be a rather simple clock that runs on air. Now it can connect with different mechanisms, such as the celestial complications. 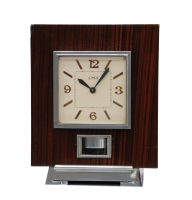 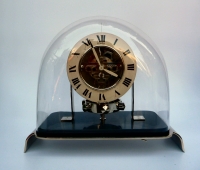