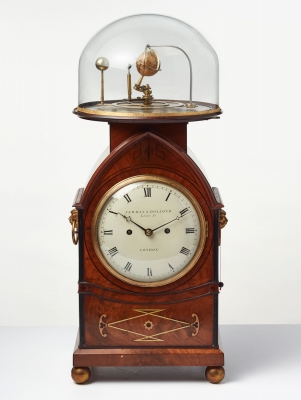 The beautiful Regency mahogany brass inlaid case on ball feet and on top the orrery connected to the movement. On the side, two bronze cast lion heads to handle the clock. On the right hand side, a pull repeat option.

The white painted dial with Roman numbers, bearing the name Newman & Dolland, Lisle Street, London. On the backside of the dial, an engraving with the signature of Newman & Dolland. Steel hands.

The orrery on top has lovely engraved silvered dials and rings indicating the position of the earth, moon and sun. A beautiful nineteenth century miniature rotating globe. The height of the clock and orrery is 65cm.

An orrery is a mechanical model of the solar system that illustrates or predicts the relative positions and motions of the planets and moon. Although the Greeks had working planetaria, the first Orrery of the modern era was produced in 1704 and one was presented to Charles Boyle, 4th Earl of Orrery - whence came the name. Orrery is located near Cork, southern Ireland.