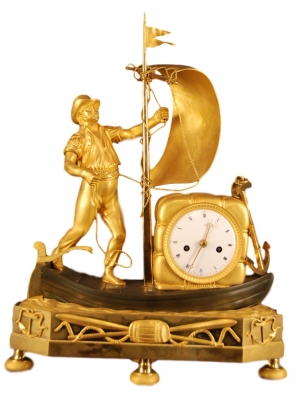 This antique gilt and patina French Directoire clock is from the rare group of clocks known as 'genre clocks' that often depicted everyday and amusing scenes from life and folklore. While some genre scenes were depicted in the late 18th century they were most popular in the early 19th century. Elk Niehusser argues that they are a departure from the classical scenes so popular with the aristocracy after the French revolution. However it is clear that scenes relating to classical republics were even more popular after the revolution than before and that the genre scenes are an additional and amusing group of clocks rather than an alternative. The main theme of the clock is trade with a boatman in traditional dress handling a sailing boat with the clock set in a bale of goods. The proportions are bizarre but that is common with genre clocks and is part of their charm. Set upon four toupee feet the base with canted corners and decorated with applied ormolu mounts of crossed oars behind a barrel and anchors decorated with ropes. The boat is set upon an ormolu sea with wavelets and the finely poinced ormolu sail billows out. The ormolu is entirely original and in very good condition. The dial is of white enamel with Black Roman numerals for the hours and Arabic numerals marking the quarters. The movement is of 8 day duration regulated by a silk suspended pendulum. It is a bell striking movement striking the hours and halves by means of a countwheel. 18.5 inches high by 14.8 inches wide by 5 inches deep (46 cms by 37 cms by 12 cms). We have two of this type of clocks in our collection. Please have a look at M156 for a similar clock. 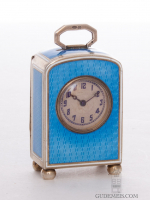 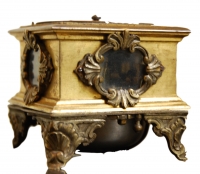 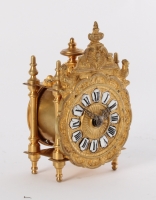