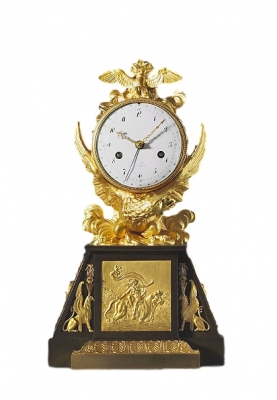 A very rare Directoire - 1793-95 - gilt and patinated bronze mantle clock of eight day duration, the white enamel dial signed a Paris, with Arabic numerals for the hours and minutes and outer Republican numerals 1-30 for the days of the month, with pierced gilt brass hands for the hours and minutes and a blued steel pointer for the calendar indications. The movement with anchor escapement, silk thread suspension, striking on the hour and half hour on a single bell, with outside count wheel. The clock drum surmounted by a flaming torch and spread wings on a cloud and supported on the wings of an eagle, symbolising Jupiter, on a bed of clouds, upon a patinated splayed plinth decorated at centre with a mount representing the Rape of Europa, the mount flanked either side by two winged griffins supporting vase-shaped coronets and lyres upon their heads, each side mounted with an Apollo mask with a pair of dolphins above and below amid foliate scrolls, the front with a projecting acanthus cast stepped border This rare clock case is of superb quality and of complex design. The central mount on the plinth shows a scene from The Rape of Europa, often depicted by the Old Masters including Carracci and Titian. According to Greek mythology, Europa was the daughter of Agenor, king of Tyre and was one of the many victims of Jupiter's sexual exploits. Jupiter, the supreme ruler of gods and mortals and chief of the twelve Olympians often resorted to metamorphosing himself into another guise so as to escape the jealousy of his wife Juno. To this end he disguised himself as a shower of rain when encountering DanaÃ«, a swan with Leda, an eagle for Ganymede and as here a white bull. He appeared to Europa on the seashore where she played with her attendants. Deceived into thinking that all was well, Europa placed garlands of flowers around the bull's horns and climbed upon its back. He then promptly took her across the water and back to Crete, where resuming his normal form he had his way with her. In keeping with the story the clock case also shows other of Jupiter's attributes. At centre, just below the dial he appears as an eagle, not only to represent him in disguise but also referring to an incident when an eagle flew toward him just before he succeeded in defeating the Titans and thus the eagle became a symbol of victory. In the same way flames and wings also allude to his victories. The sides of the plinth show an Apollo mask; Apollo being one of the twelve Olympian Gods was the twin son of Jupiter by one of his lovers, Leto. Interestingly his face is accompanied by four dolphins, which in some paintings, such as one by Titian, are shown in the water ridden by putti as Europa and the bull speed across the sea. The case also includes overtly Egyptian decorations in the form of winged griffins as well as the pyramidal shape of the plinth. Such designs reflect France's growing interest in Egypt, which emerged during the mid eighteenth century, was encouraged by the publication of Piranesi's designs of Egyptian ornament, 1769 and later fuelled by Napoleon's Egyptian campaign of 1798. The dial, with its lack of a makers name as well as the 30 day calendar ring, indicates that the clock was made during the Revolutionary years. Clockmakers, formerly patronised by royalty and aristocracy were now reluctant to advertise their names on the dials and thus as here, had the dial painter simply inscribe the words 'a Paris'. In 1793 a new Republican time system was introduced. This new decimal system stipulated that the months should be divided into 30 rather than 31 days, the days into ten hours and hours into 100 minutes. Few dials show true Revolutionary time but some, such as this example, show the new calendar divisions. However, the new time scale proved so complicated that in 1795 it was abandoned in favour of the former Gregorian system. 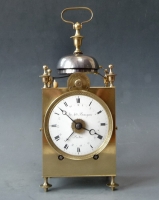