This entire story of Perseus and Andromeda is depicted on this clock. Behind the moving ships Andromeda is chained to the rocks. The sea snake is approaching and Perseus rides on Pegasus’ back. In the iconography of the arts, Pegasus and the winged sandals are alternately used.
The scene is being watched by two other sea monsters and a whale. On the left side Poseidon is watching in his chariot, on the right Mercurius. Top left is Hera with her peacocks and on the right Zeus is looking down upon the scene with his lightning bold and eagle. On the background of the clock the coast is depicted the fighting scene on the beach, where a figure is already transitioning into stone. 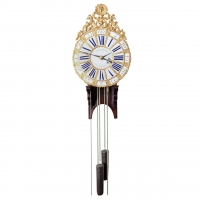 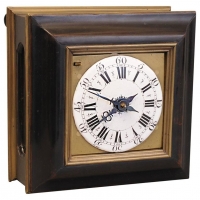