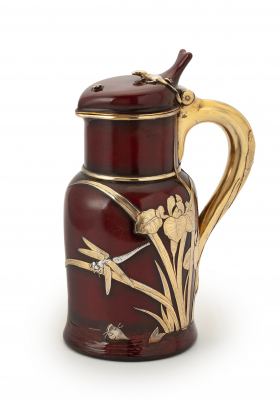 This dark red cinnabar-colored parcel-gilt silver lidded jug was made in Japonesque taste by the famous Russian silversmith Ovchinnikov. The jug displays naturalistic elements in the form of applied and engraved irises in a pond with a carp and bamboo stick and two dragonflies on the body and an applied lizard and fly on the hinged lid. The silver-gilt handle displays an applied beetle.
The design for this jug was derived by Ovchinnikov from the famous Tiffany pitcher in the Japonesque style, which was designed by Edward C. Moore (1827-1891) for the Paris Exhibition (Paris Exposition Universelle) of 1878. The design was almost certainly inspired by the work of Katsushika Hokusai, a Japanese artist known for his dynamic woodblock prints of the natural world.
The Tiffany & Co exhibit of Japanesque-inspired silver at the Exposition Universelle in Paris was critically acclaimed, the firm winning the grand prix for silverware while the head of the company, Charles L. Tiffany was made a chevalier Légion d'Honneur for the magnificent Tiffany & Co display in Paris. The Tiffany pitcher is in the Art Institute of Chicago on display.
Apparently, Ovchinnikov copied the 1878 Tiffany example in 1882 and 1883 for similar silver-gilt lidded jug with hammered surface without lacquer. The 1882 one is in British Museum London and the other one was sold by Christie’s London in 2008. Due to the worldwide major exhibitions in the 19th century, there was free movement of design. This jug, in similar outline, is a dark red cinnabar-colored lacquered example that exemplifies how artists in Europe and North-America followed the broader Aesthetic Movement, precursor of the Arts and Crafts and Art Nouveau movements, with strong influence from Japanese exports after trading commenced in 1853. The implementation of Oriental shapes, techniques and natural ornaments, here present in the iris, dragonflies, lizard and carp, were visible in furniture, silver, porcelain and glass.
Pavel Akimovich Ovchinnikov (1830-1888)
Pavel Akimovich Ovchinnikov‘s life was a success story. Despite the fact that he was born into a rather humble family, living in the Moscow area, Prince Dimitri Volkonski, who sent him as an apprentice to a Moscow jewellery shop, provided him the opportunity to broaden his horizons.
In 1853 he founded his own workshop, which developed into a factory with more than a hundred employees, specializing in gold, silver, enamel and jewels. In 1865 he was appointed Court supplier to the future Zsar Alexander III and he won the gold medal at the Pan-Russian manufacturing exhibition that same year. In 1867 he participated in the Exposition Universelle in Paris. A few years later he was appointed Court supplier to the Italian Court of King Vittorio Emanuelle II and to the Danish Court of King Christian IX.
In 1873 Ovchinnikov expanded his business to St Petersburg and the number of employees increased to over three hundred by 1881. One of his major accomplishments was the opening of an educational centre in his Moscow factory, where future artists and craftsmen were trained in drawing techniques and modelling. The Ovchinnikov firm was renowned for its enamel works throughout Europe, mastering different processing techniques, such as cloisonné, champlevé and on watermark. After Pavel Ovchinnikov’s death in 1888 his four sons took over the company. In 1917 the trading stopped due to the outbreak of the Russian Revolution. Nowadays, Ovchinnikov objects are on display in leading international museums and are part of royal collections.
This Russian silver-gilt and lacquer lidded jug used to be in the private collection of Dr Johann Georg Mezger and was bequeathed to his heirs. Dr Mezger might have received this jug from the Imperial Russian family for his medical treatment, as they usually presented him with all sorts of precious gifts, including the famous retailed Fabergé egg-clock, a present from Empress Maria Fyodorovna.
Dr Johann Georg Mezger (1838-1909)
Dr Johann Georg Mezger was a doctor who, after his graduation at Leiden University in 1868, wrote his thesis on the healing powers of manual therapy. He became very successful with his new healing methods, which gave him the nickname ‘doctor with the golden thumbs’. After he had successfully treated one of King Willem III sons and was granted a Royal award in 1870, his fame spread throughout Europe. European royalty and aristocrats were among his patients, for instance, Empress Elisabeth (Sissi), Empress Eugėnie of France, Queen Elisabeth zu Wied from Rumania and Baron Lionel Walter Rothschild. Most of these patients were treated by Dr Mezger at the Amstel Hotel in Amsterdam and in Hotel Des Indes in The Hague, where he initially resided. In 1888 Dr Mezger and his family moved to Wiesbaden, Germany, but resided at the seaside in Domburg, the Netherlands, during the summer months, where they owned Villa Irma. Due to Dr Mezger, who also treated his patients there, Domburg gained popularity as a seaside resort.
Dr Metzger was summoned to St Petersburg in 1886 by Emperor Alexander III to treat the Imperial Consort. On 26th May 1886 Dr Mezger was awarded the Order of St. Stanislas for his services. Dr Mezger frequently conducted massage sessions with members of the Russian Imperial family, including the Empress and the Great Princesses Xenia Alexandrovna and in particular Olga Alexandrovna, who had been heavily injured during the 1888 crash of the imperial train in Borky.

Maker
Pavel Akimovich Ovchinnikov
Periode
1883 | Moscow
Materiaal
silver-gilt and laquer
Signatuur
Fully marked inside at the base and at the reverse, maker’s mark below Imperial Warrant
Referentie
100-551
Afmetingen
28.5 cm 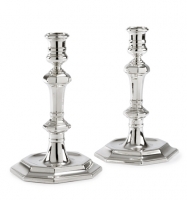