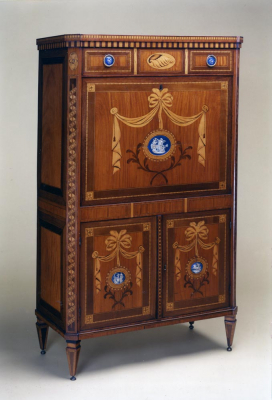 This secrétaire à abattant is beautifully decorated with marquetry ribbons, foliage and festoons flanking Jasperware plaques set in a rectangle cartouche. The Wedgewood plaques were imported from England and are quite rare in Dutch furniture. The large plaque in the middle of the fall-front is an allegory of the Arts. The same image has been used in a Sèvres plaque for the jewelery cabinet of Queen Marie-Antoinette at Château Versailles (1787).
The bottom of the secrétaire à abattant has two doors with inside a shelf. The doors are again decorated with Jasperware plaques depicting on the left the dipping of Achilles by his mother Thetis while his father Peleus kneels beside him bearing two torches on his shoulders. On the right is Aurora, Goddess of dawn riding her chariot through the sky.

The top drawer has two blue enamel plaques with flowers, flanking a marquetry seashell. The inside of the secrétaire features multiple pigeonholes, four drawers and one lockable compartment. 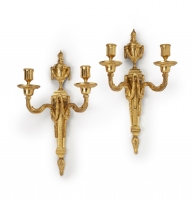 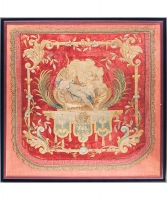