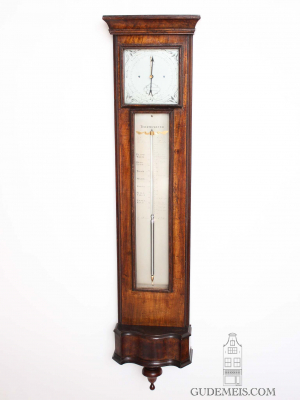 During the development of the barometer many of the improvements have been aimed at finding a way to enlarge the scale making it easier to read the instrument. With the simple barometer by Toricelli the scale is limited to a mere seven centimetres making it difficult to record small fluctuations in barometric pressure. Most Dutch barometers from this period use the ‘contrabarometer’ system invented by the famous Dutch scientist Huygens. But this barometer is a wheelbarometer which principle is as following. A small ‘floater’ hangs by a thread with a counter weight over an axis on which a pointer is attached. The ‘floater’ rests on the mercury in the open end of a bent glass tube. With the changes in barometric pressure the level of the mercury goes up or down causing the hand to turn. Even small changes are magnified by the hand. In both England and France wheelbarometers are fairly common especially in the 19th Century. But these are of a totally different design compared to this instrument. The design of this barometer has many similarities with the contemporary simple- and contrabarometers made in Holland in this period. 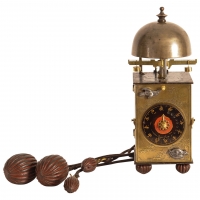