The Clockwork
The clockwork with anchor escapement. Dutch striking, strikes fully on the hour on the large bell and every half hour on the smaller bell. The clockwork also features a musical train, playing in full and half hours, with fourteen melodies and a complete calendar with day, date, month and moon indication.
Dial with gilt centre. An engraved silver-plated ring with hours in roman numerals and minutes in Arabic numerals. In the gilded centre at the top a moon indication with a painted depiction; below this the lunar days and the tidal effects. On the left, a month indication with a corresponding image and the number of days of that month.
On the right, the days of the week with associated symbols and astronomical signs.
At the bottom a date indication (day of the month).

At the far left, concealed behind the door, levers to turn the strikes and musical train on or off. On the right-hand side, a lever for a seven tune selection, the melodies can be set to change on the hour and on the half hour. The various tunes are listed on a silver-plated brass shield on the inside of the door. At the bottom of the silvered numeric ring, the engraved signature "Rutgerus van Meurs Amsteldam". The dial is richly decorated with a painted image depicting one continent in each corner (from top left and clockwise: Europe; Asia; Africa; America) and above the dial a depiction of a music-making company from antiquity led by Apollo Musagetes.

The case consists of an oak core veneered with burr walnut. The door is finely decorated with bow and leaf motifs and rosettes. The top and bottom decorated with inlays of elegant flowers and, at the bottom, cornucopias. The pendulum window has a gilded bronze ornament with a flower basket in the centre with an elegant flower arrangement. The clock’s base is of a rounded shape and is decorated with a depiction of a vase of flowers and rests on four clawed feet.
The hood features richly fretwork and carved mouldings and fretwork and is crowned by three bronze figurines representing Atlas, Mercury and a trumpeter.

Rutgerus van Meurs
Rutgerus van Meurs was born in Amsterdam on 9 June 1736 as the son of Otto van Meurs and Elisabeth Potgieter. Like his father, he was a member of the well-known Amsterdam clockmaker family Van Meurs. Planisphere clocks by both Rutgerus and his father are known. However, Rutgerus mainly produced Amsterdam standing clocks, usually featuring a musical automaton. He crafted turret clocks as well and pocket watches by his hand are also known.
Rutgerus van Meurs lived and worked at Utrechtsestraat 143 in Amsterdam. He married Elisabeth Moret in 1765. They had at least three children, but other sources mention as many as eleven. The clockmaker died on 25 July 1800 in Amsterdam, at the age of 62.
Rutgerus van Meurs is known for the high quality of his timepieces and his collaboration with the best painters and furniture makers. 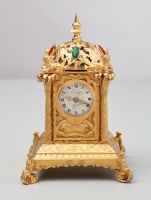