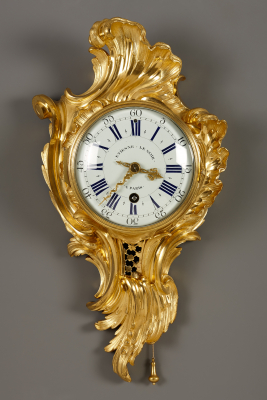 The fourteen-day movement is driven by a spring barrel. It is regulated by an anchor escapement in combination with a pendulum hung on silk. The movement has a pull quarter repeat on two bells. The white enamelled dial features blue Roman numerals for the hours and an outer ring indicating the minutes in black Arabic numerals. The openwork hour and minute hands are made of gilt bronze. The clock is signed in the centre: “Etienne Le Noir à Paris”. The reverse of the dial is signed “A.N. Martiniere, P. naire du Roy, may 1748”.

The fire-gilt bronze case incorporates asymmetrically shaped, stylised acanthus leaves and has an openwork lenticle at the bottom.

Etienne Le Noir
Pierre-Etienne Le Noir (1724-?), born into a family of watch and clockmakers, owned a workshop with his father Etienne Le Noir (1669-1778) on Quai des Orfèvres in Paris from 1743 on. As they both signed their works “Etienne Le Noir à Paris”, there is no way to definitively distinguish between the works of father and son. Etienne Le Noir built clocks and watches for various clients, including the French court - Mme. de Pompadour and Mme. Du Barry in particular.

Antoine-Nicolas Martiniere
A.N. Martiniere (1706 – 1784) obtained maître (master) status in 1720 and was one of the most prominent enamellers during Louis XV’s reign. As such, his customers included the most highly skilled of clockmakers. An article published in Le Mercure de France in April 1740 reported that the king himself had placed an order for an exceptionally large enamelled dial. Other enamellers had been unable to guarantee satisfactory results, but Martiniere managed to craft a piece that pleased the king greatly, and he was named Pensionnaire du Roi (Pensioner of the King) a year later. 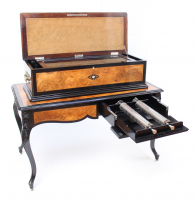 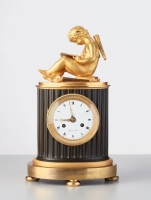