A Dutch burr walnut striking alarm longcase clock with calendar Ed Brookes circa 1725.
Brass dial with early arch and engraved wheatear border, silvered engraved chapter ring signed Ed Brookes Amsterdam, pierced blued hands and slivered alarm disc, matted centre with ringed winding holes, subsidiary seconds and apertures for tide, day of the week with day-sign and date, season spandrels and finely engraved moon phase in the arch, 8-day weight driven movement with anchor escapement and rack half hour striking on a bell, alarm on a bell, fine burr walnut veneered case with bell top surmounted by three ball finials, foliate pierced frets below the break arch moulded cornice and sides, twisted columns flanking the glazed door, straight trunk with oval lentel to the long break arch door, square base with moulded plinth raised on bun feet. This fine clock with well-executed details is an example of the clocks with the early moon phases. The workmanship which is evident when looking at the case and dial is of the highest quality.
Ed Brookes, ca 1667- after 1713 London/Amsterdam. He was born ca 1667 in London and listed there in 1692 for the last time. Married 14th October 1696 in the "Engelse Kerk te Amsterdam"
In that year his workshop was in the Wolvenstraat and later in the Oude Turfmarkt. In 1704 his name was listed in the register of "Goede Mannen". His name was recorded in 1713 for the last time. 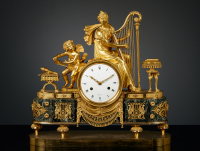 A French industrial mantel clock by Guilmet, circa 1890 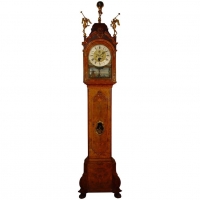