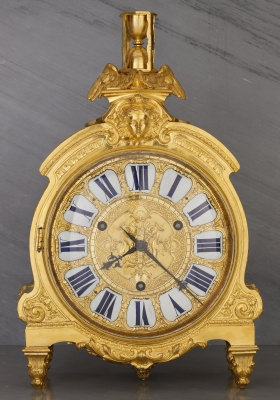 A pendule de cartonnier on four tapering and fluted feet decorated with acanthus leaves. On the front the dial is integrated in the plinth and supported on both sides by C-scrolls with foliate decoration. Under the dial the case is decorated with acanthus leaves flanking a shell. The upper part shows a woman’s mask and is topped by the wings of Time and an hourglass (Tempus fugit; time flies). The underside of the clock is decorated with lavish acanthus foliage around a small pendentive.
The sides of the clock case both show a lyre with two Thyrsus rods, a winged male mask and ram’s masks within a C-scroll cartouche. This cartouche is linked to the plinth by scrolls and foliate decoration and linked to the top by shells. The top, under the hourglass and wings, shows shells and a pierced pattern of squares.

The ormolu dial bears twelve C-scroll cartouches with Roman numerals in blue on a plaque of white enamel for the hours. The minutes are shown on the outer ring with engraved Arabic numerals. The hands for both hours and minutes are of blued steel.
The ormolu circle in the middle of the dial is finely chased and decorated with a rosette pattern, shells and palmettes. A flaming torch and two trumpets are held together by a foliate wreath and flanked by winged mythical (snake-like) animals.

The movement is of three weeks duration with a verge escapement. The clock strikes every fifteen minutes on two bells, every hour on one bell.
Louis Mynuel was a clockmaker who worked with a “Privilège du Roy” which means he used to live and work with other artisans in the Louvre, where the king lodged clockmakers, furniture makers and bronze casters who worked for the court.

The clock was very probably designed by André Charles Boulle (1642-1732) himself.
Attribution to A.C. Boulle is suggested by the use of the hourglass and wings motif. It is a motif published in the 1725-1730 “Nouveaux Deisseins de Meubles et Ouvrages de Bronze et de Marqueterie Inventés et gravés par André Charles Boulle”. This was a publication of the newest and most fashionable designs and models Boulle had recently come up with. The hourglass and wings motif shows up on Plate II of the Nouveaux Deisseins in the model of a “Petite pendule de cabinet”.
This theme was already used by Boulle around 1705 in a red chalk drawing depicting the model of a “Régulateur” clock, crowned by a winged hourglass. He took the same motif up again in ca. 1725-1730 for the Petite pendule de cabinet and in a pencil drawing but in both cases with a variation on the theme: the hourglass itself is not winged, but in both drawings the hourglass and wings are depicted at the top of the clock case (Jean Nerée Ronfort, pp. 336-337, pp. 358-363).
But not only the hourglass and wings suggest Boulle as the designer. The model of the clock case and the fact that it is an “all-bronze” clock, seem to be taken from the same “Petite pendule de cabinet” design. Indeed it is a small clock, of perfect size to put on a cartonnier, (a filing cabinet fitted with pigeonholes or compartments to hold papers. It usually stood on, or at the end of, a writing table or “bureau plat”).

Favouring the attribution to André Charles Boulle is also the use of the very symmetrical acanthus C-volutes. These scrolls are a recurrent theme in Boulles ornaments as of course the symmetrical use of ornaments characterises the Régence period. But with Boulle they are not merely an ornamental theme, there is the specific way he uses these volutes and the elaborate way the scrolls are formed, which characterise them as “Boulle” (Ottomeyer & Pröschel, vol I, p. 42).

And last but not least: the clock case is of one material only: ormolu or gilt bronze. Boulle used to be one of the first to manufacture clock cases of ormolu without any other material such as wood, brass or tin. Several ormolu table clocks by Boulle can be dated at ca. 1715, for instance the Pendule with Day and Night, of bronze and ormolu which also shows an hourglass and wings (Ottomeyer & Pröschel, vol.I, p.45). 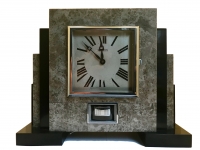 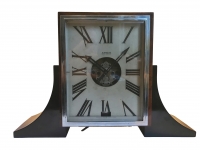