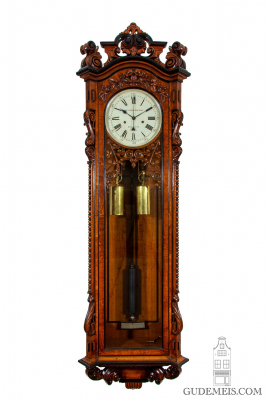 The 28.5-cm Japanned dial has Roman chapters and Arabic numerals for the five minute indication. The centre is signed Tho Armstrong & Bro Manchester. The spade hands and counter weighted sweep seconds are made of blued steel.

The well built brass movement is driven by two weights and has a duration of a week. It is mounted on two brass ‘gothic’ brackets mounted on the back board. The going train has Graham escapement and Harrison’s maintaining power. The pendulum with black lacquered wood rod and zinc bob is separately roller suspended from the back board of the case. The movement has half hour striking on a gong by means of rack striking. It is quite unusual for an English clock to strike the half hours with a single strike.

The imposing case is made of three quarter cut oak which causes a beautiful glimmering pattern in the grain to be shown. The honey colored wood is enlivened with ebonised accents. The moulded arched top is surmounted by a carved pierced cresting flanked by two scrolls. Above and below the dial there is carved oak leaf ornament. The rounded mouldings on the canted corners are terminated by carved scrolls. The heavy moulded base terminates in two ogee shaped brackets.

Thomas Armstrong was born in 1829 and the son of Joseph Armstrong clockmaker in Manchester. He worked with his father and took over the business in 1873. Together with his brother he also had a shop in Liverpool. 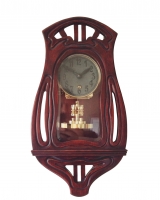