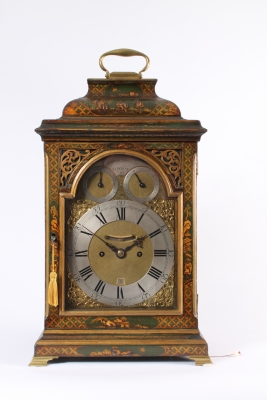 This Georgian green lacquered and chinoiserie bracket clock with a shallow inverted bell top is signed 'Conyers Dunlop' (1725-1779) . The broken arch dial has cast spandrels and silvered and nicely engraved chapters which include both fast/slow and rise/fall indicators, a nameplate, calendar, and also has a false pendulum. All the chapters have finely matted centers with the unusual feature of the smaller chapter's centers being raised. The eight-day double fusee movement with repeat has a finely engraved backplate and retains its original crownwheel escapement. Since lacquer work was so susceptible to damage from its environment, the vast majority, including this example, have at one point been restored.

A small German wall clock with alarm, circa 1860 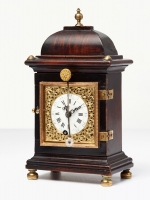 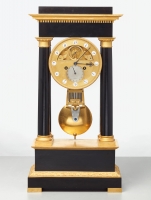 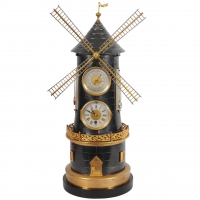