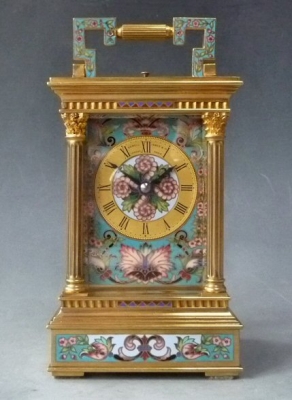 No 191. Carriage clock, case Anglaise by Richard, cloisonné decorations, circa 1880.

From http://mb.nawcc.org. About the clockmaker Richard.
According to Charles Allix (in his Carriage Clock book), this firm was founded in Paris in1848 under a different name and added a branch in London in 1857. Then in 1867 the branch became Richard & Co. of 24 Cannon Street, London. In France, this would be Richard et Cie. Loomes says that the London business lasted until 1881. Allix also says that the inscription "R & Co" (close to your R & C) without the full trademark probably denotes a clock handled by Richard but not made by them. The Richard trademark contains an R and C with a snake's head in between, all enclosed within an oval. 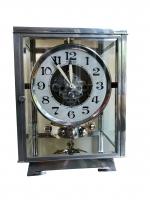