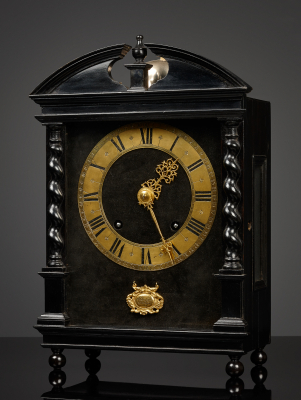 Movement
Between the two brass plates, attached to each other with five pillars, we find the fourteen-day spring barrel movement driven by a verge escapement. The pendulum’s suspension is mounted on the rear plate, using a cord suspension between cycloidal chops. Striking train with countwheel striking whole and half hours with a single bell is driven by a second spring barrel. The clock is signed Johannes van Ceulen fecit Hague on the rear plate.

Dial
The sober brass front plate covered with black velvet shows the numeral ring of gilt brass with Roman numerals for the hours and Arabic numerals for the minutes. Openwork hour and minute hands. Beneath the numeral VI is a small shield bearing the signature: Joh Van Ceulen Fecit Hague.

Case
The case has an ebony veneer, rests upon four ball feet and has a windowed door on the front side. The window has a profiled ebony edge and is flanked by two twisting columns. With the door opened, the clock’s front, on which the movement is mounted, can be swung forwards using a metal slide affixed to the ground plate, level with the numeral III. The clock’s sides each feature a rectangular window with a profiled ebony frame. The arc-shaped interrupted pediment is embellished with a profiled edge. Two suspension eyes have been affixed to the rear of the clock, allowing the clock to be mounted on the wall. The interior rear side of the clock has been decorated with a parquetry six-pointed star, a common ornament in clocks from The Hague.

Johannes van Ceulen became a citizen of The Hague in 1676, and co-founded the clockmaker’s guild of The Hague in 1688. Since his son Johannes was also a clockmaker, he is also known as the Elder. Van Ceulen ran a large workshop with a significant production, and was successful both domestically and abroad. By the time of his death in 1715, he had amassed a respectable fortune. 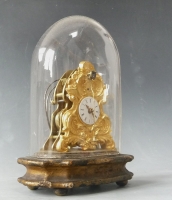