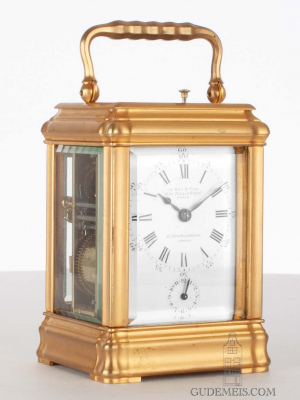 The 5-cm wide enamel dial has Roman numerals and is signed Le Roy & Fils 13-15 Palais-Royal Paris and 57 New Bond Street London. Below there is the subsidiary for alarm. The spade hands are made of blued steel.

The movement is driven by two spring barrels and has eight day duration. It is being regulated by a platform lever escapement in combination with a bi-metallic balance with adjustment screws. The clock strikes the ‘ship’s hours’ by means of rack striking on two gongs. It is the striking system that is used in shipping during the watch. It is a combination of single and double blows indicating each half hour (ship’s bells). The use originated from the turning of hour glasses which ran for 30 mins. After the turning of each glass the number was struck on the ship’s bell. After eight half hours, four hours, the watch changes and the sequence starts again. Finally the clock has an alarm which can be activated by winding a small auxiliary spring barrel.

The gilt brass case with its fine mouldings is called ‘gorge case’. The relative small size is called three quarter size by collectors and connoisseurs. It is surmounted by a handle and has a nice large beveled glass panel showing the beautiful escapement. Further beveled glass panels are on all sides. The whole is raised on a moulded plinth with flat feet. 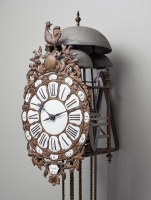 A French quarter striking lantern clock by Fardoil, circa 17...

A French obelisk barometer, probably made in 1836