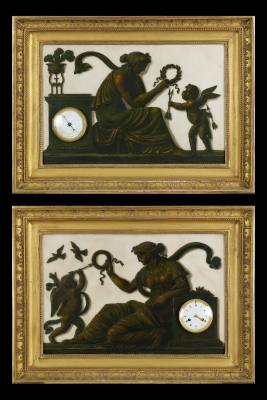 A pair of ‘trompe l’oeil’ paintings on a white marble base, containing a clock and a barometer. The representations, that give the impression to be bas-reliefs, are painted by Piat Joseph Sauvage, and are scenes from the myth of Psyche and Cupid.

Psyche and Cupid
A princess, by the name of Psyche, was not able to find a suitable spouse once she had reached a marriageable age. This was due to the fact that she was so beautiful that men only dared to distantly adore her and thought she was the human apparition of the goddess of love. Whereas the behavior of her secret admirers grieved and embarrassed the princess, it aroused the anger of Aphrodite, the true deity of love and beauty. She summoned her son, the young and glee loving Eros, to enchant Psyche to fall in love with just any despicable creature and hence suffer so much it would consume her beauty. Obediently Eros heads for earth, but once he lays eyes on Psyche, his heart is filled with love for her.

Piat Joseph Sauvage (1744 – 1818)
This work is typical for the decorative objects of Sauvage, born in Tournai. The Flemmish Sauvage is best known for his decorative grisaille and trompe l’oeil paintings, strongly influenced by the work of Jacob de Wit. He specializes in imitations of sculpted bas-reliefs in stone and marble, but also in bronze, terracotta, and stucco. His representations are mostly based on antiquity with mythological representations, playful putti, and classically dressed figures.

Having worked for the glazing company of his father until he was seventeen years of age, he moved to Antwerp for his artistic education where he was trained, among other, by Martin Joseph Geraerts. In 1744 Sauvage settles in Paris and becomes a member of the ‘Académie de Saint-Luc’. In 1783 he was introduced in the Académie royale de peinture et de sculpture, which gave him access to an important clientele like Louis-Joseph de Bourbon, the Prince de Condé and Louis XVI. From 1804 to 1807 he worked for the Manufacture de Sèvres as decoration painter.
In 1808 Sauvage returns to his birthplace Tournai to become director of the ‘Académie des beaux-arts’. He will hold this position with great success until his death in 1818. 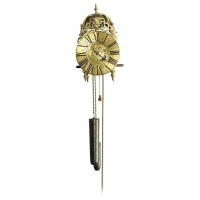 A small French alarm lantern timepiece, by Le Doux, circa 17... 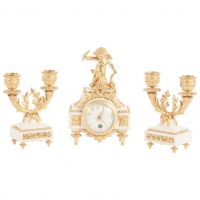