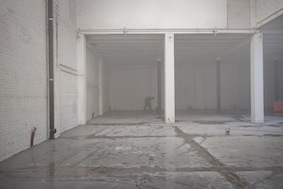 After having founded the collaborative gallery OneTwenty in 2004, restorer of ancient and modern sculpture & art-historian Tatjana Pieters continued independently from October 2005. After 5 years at the Burggravenlaan 40 in Ghent, Galerie Tatjana Pieters has moved to Nieuwevaart 124. This relocation is another step in the growth of the gallery, which since its inception in October 2005 has become one of the major players for contemporary art in Ghent and Belgium.

Committed to the importance of art within a social framework, even outside the gallery context, the choice to relocate to the 'peripheral context' of Ghent and to move to an even larger space was on explicit one. No central location in a matchbox, but a clear position in a location where the operation of the gallery becomes a surplus for the artistic atmosphere. Not only locally but also nationally and internationally. Pioneers work, ‘think local, act global' instead of ‘act global, think local’.

This peripheral character is also consistent with the artistic choices of the gallery: presenting artists before they are emerging or re- contextualizing mid- career/established artists that have been overlooked. Galerie Tatjana Pieters chooses to function as a katalysator in the growth of the artist’s artistic development & career.

The new gallery location offers a larger exhibition space creating a platform that allows room for experiment and functions as a transit to an institutional level, Underlining the vision that a gallery must be a space to create exhibitions and must remain, hence the choice of an even more institutional space.

The gallery has moved to an old warehouse in a new development area of Ghent, near the water. In an area where currently many new artistic initiatives occur: artist studios (Het Vogelnest), architectural bureaus, rehearsal rooms for dance (Ballet C de la B) and music .... The district has all potential to become the ‘Chelsea of Ghent’.

Pieters chooses to function as a katalysator in the growth of the artist’s artistic development & career, often presenting artists before they are emerging or re-contextualizing mid-career/established artists that have been overlooked. The gallery works with a peer group of Belgian and international artists, working in several mediums.

Since 2008 Pieters is an appointed member for the Visual Arts Subsidy Commission of the Flemish Community and since 2010 Board member of the Associated Friends of the S.M.A.K. (Museum of Contemporary Art Ghent). She has given several lectures on being a young gallerist, and is often invited as a jury member for several awards, a.o. the Flemish Culture Prize for Visual Arts 2008.