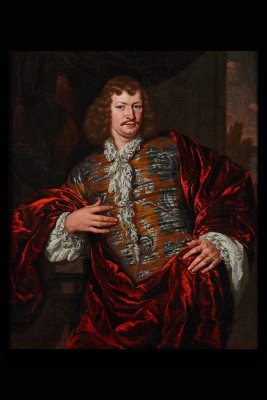 A man is looking at us. He is dressed in an embroidered cardigan with floral patterns trimmed with lace and a lace scarf. A red drapery hangs around his shoulders and over his arm. This portrait is a typical example of a painting from the successful years of Michiel van Musscher.

Van Musscher was born into a Mennonite family in Rotterdam. According to Houbraken, the eighteenth-century artist's biographer, he showed at an early age that he was an artist.

He was apprenticed to Martin Saagmolen, Abraham van den Tempel, Gabriël Metsu and Adriaen van Ostade. In 1660 he settled in Amsterdam. At the start of his career, he focused primarily on genre pieces. Genre painting, however, has not become a Van Musscher specialty. He soon developed into a very popular portrait painter. Many came from his own Baptist community; in addition to his family, he painted prominent Mennonite elders such as Tobias van de Wijngaert and Galenus Abrahams. That the Mennonite trade elite also found its way to his studio is clear from portrait commissions for the De Neufville and Rooleeuw families. His clientele also included regent-patrician families. Van Musscher benefited enormously from the gap in the Amsterdam portrait market around 1670 when Ferdinand Bol (1616–80) stopped painting and Bartholomeus van der Helst (1613–70) died. His most important competitor, Nicolaes Maes (1634–93), returned to Amsterdam from Dordrecht in 1673. Various members of influential Amsterdam families such as the Bickers, the Valckeniers and the Van Loons have their portraits painted by Van Musscher. His most important patron in the higher regions of society was possibly 'the art-loving Mr. Jonas Witsen '. The portrait that Van Musscher van Witsen painted was described by Houbraken as 'excellent in painting' and surpassed all others.

The portraits of Van Musscher were so in demand that he even attracted princely patrons, including Frisian governor Hendrik Casimir II and his wife, and Johan Maurits van Nassau-Siegen. Among his most prestigious assignments were portraits of the Russian tsar Peter the Great and members of his retinue during their visit to the Dutch Republic in 1697.

This portrait of an as yet unknown man was painted in 1684. This was an intense year for the painter. His first wife Eva Visscher died. She left the painter with two children, one of whom also died within two months. He converted to Remonstrant faith shortly after these events. Nevertheless, he managed to complete several portrait assignments during this difficult period. In addition to this painting, a few portraits from 1684 are known.
This painting was probably auctioned in London in the 1960s. Unfortunately, no image of the painting that was painted at he time is known. However, the description suggests that this is the portrait:

"Portrait of a burgher, small three-quarter length, embroidered brown coat with lace collar and cuffs, and dark red cloak, leaning on a plinth on a terrace signed and dated 1684 25 in by 21 in." 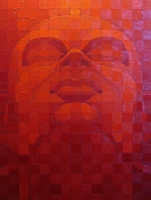