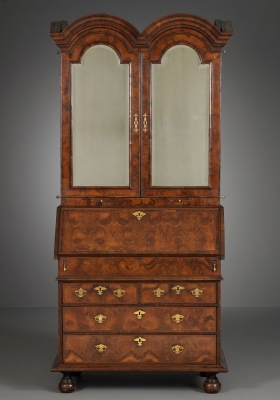 The desk comprises of a bottom and a top cabinet, resting on flattened bun feet. The base cabinet with two short and two long drawers that can be locked. The drawers feature herringbone veneer banding and finely crafted brass key plates and drawer pulls engraved with foliate motifs. The securable, hinged flap with a brass key plate rests on aprons fitted with pear-shaped brass pullers. The exterior of the fall-front can also serve as a music stand.
The slope encloses a fitted interior with ten pigeon-holes and five further drawers above a well with sliding cover and a leather-lined writing surface. The sunken storage space includes a hidden drawer.

The upper cabinet has two arched doors, decorated by etched mirror plates. The doors turn on knife pivot hinges and can be secured. Both the doors and the mirrors feature arched bevelling. The beautifully moulded hood frame follows the shape of both doors and is double domed. Under the doors two pull-out candle slides, or “tirettes”, to hold candlesticks. The mirrored doors reflect the candlelight and thereby allow the user to read in the evening or write sheet music, for example.

The interior of the upper cabinet is equipped with a large array of drawers and adjustable pigeonholes and also has numerous compartments for the storage of sheet music. The top shelf offers sufficient space underneath the double-curved hood to display decorative objects. The desk also features various well-hidden secret drawers underneath and behind several of the visible drawers.

The use of a combination of oak and pinewood for the frame, the shape and form of the brass fittings as well as the positioning of the lock plates at the top of the drawers, all characterize this stunning top desk as typically English.

A pair of Chinese cloisonné planters with jade flower tree 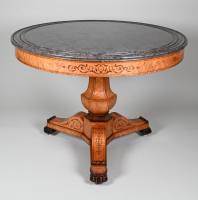