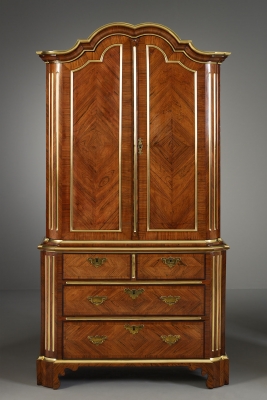 This bureau-cabinet consist of an upper and lower part. The lower part rests on legs and has four drawers. The upper part has two doors with framed panels in diamond matched veneer. The corner posts are lined with brass. The entire cabinet is decorated with brass frames and cornices. The English fittings are made out of brass.
The interior of the upper part is an escritoire with a fold-out writing table with a leather top and many drawers and pigeon-holes. The upper compartment covers the entire width of the cabinet. Behind the writing table there are more drawers and compartments.

The interior of the wall unit contains a fold lockable writing surface that rests on a drudge. On the outside, the blade is decorated with satin-wood in the form of two doors between which the key plate on top. The blade is flanked by four drawers with beveled corners. Above the writing desk are three drawers and seven storage boxes or "pigeon holes". Above it, is over the entire width of the cabinet a storage compartment. The row pigeonholes is beautifully designed with molded tops. The oak wood on the inside of all storage compartments is decorated with striking dark spots and speckles in turtle imitation.
Behind the writing surface are even more hidden drawers and a cabinet with a mirror glass. Also, there are again behind some drawers and secret compartments. The writing surface is covered with leather.

On the rear of this piece of furniture is a label dated 1944 of the Centraal Museum in Utrecht.
Research revealed that this bureau-cabinet, along with other furniture of Mr. Willem Baron Röell was in custody at the Centraal Museum in Utrecht during the war. Because many individuals took advantageof the service offered by the Central Museum for safe custody, the warehouses were quickly filled. Hence, in the course of 1944 a number of pieces were moved to castle Merckenburgh in Heukelum.

The bureau-cabinet was then incorrectly described on the label and dated as "mahogany cabinet with brass fittings, end of 18th century," possibly by the haste with which one and another had to be done, and probably by a non-furniture art specialist. Nevertheless, this piece of furniture is listed in the transport list and correspondence dated April 8, 1944 as a "cabinet with 2 doors, drawers and brass fittings around 1720 ".

This bureau-cabinet shows both in construction and decoration many characteristics of the English "desk-cabinet", in its definite form from around 1730. The English commode from the 17th century emerged in the 18th century with a top box as combination of drawers, desk and closet.
The decoration was in England mostly from finely processed wood, mirrored doors and brass inlaid fluting. It was the cabinetmaker John Channing who precisely in the years 1730-1740 showed himself a master in decorating with brass. Abraham Roentgen probably worked during his London years (1733-1739) in Channings studio.
Based on the structural and decorative characteristics and in comparison to furniture from Roentgens Hernhager period (1742-1750), this bureau-cabinet was perhaps produced by or under the influence of Abraham Roentgen during his second period in the Netherlands (1739 -1742).
English inspired furniture (both in form and decoration), were in the northern Netherlands and in northern and central Germany very popular and especially the desk cabinet was, in all its variations, the representative of furniture par excellence of the 18th century moneyed elite.

Provenance:
The writing cabinet comes from the collection of Mr. Willem Baron Röell (Baarn 1897-1971  Zeist). Röell, living in Bosch en Duin near the city of Utrecht, held several functions within the judiciary. The genus Röell is originally from Germany (Westphalen) where Johann von Röell (1599 to 1659) due to its appearance in the Thirty Years War was elevated in the peerage.
Johanns youngest son Hermann Alexander Röell came in 1670 to the Republic of the United Netherlands and was the father of the Dutch branch of the family. In 1815 his descendant, the statesman William Frederick Röell was raised to the Dutch nobility. The family delivered in the course of the centuries several Dutch rulers in high positions, including a councilor and minister, and functions related to the Royal Family. 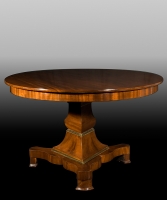 An Empire Mahogany Round Table