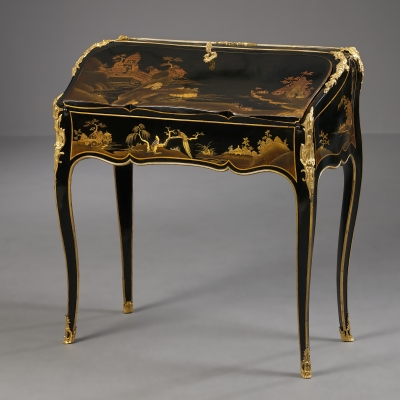 The writing desk rests on elegant double curved legs and curved surfaces on all sides. The obliquely rising flap can be opened, and serves as a writing surface. The inside is veneered with floral motifs in rosewood. The interior has three small drawers and underneath a storage compartment that opens with a sliding panel (à coulisse).
The exterior of the writing desk is completely lacquered; A description of the object. The planes with landscapes are made of Japanese lacquer, the plain black parts in 'Vernis Martin'.
The secrétaire is equipped with gilded bronze trims along the pillars and richly decorated gilt bronze ornaments and sabots. All sides as well as the top and the valve are decorated with Oriental landscapes in Japanese lacquer.

A piece of furniture by Latz can be recognized by its ornaments, even if it is not stamped. Latz was, along with Boulle and Cressent the Ebenist providing the highest quality bronze used. In 1749 a search request by the guild of bronze casters was made in the studio of Latz. In addition, several bronze ornaments were found that revealed Latz had cast his own bronzes and embossing for its furniture and clock cases. The result of the official searchrecord made mention of 2288 models and elements of bronze which Latz held exclusively for himself.

This secrétaire has a number of bronze elements that appear only on Latz furniture, namely:
4 ornaments 2 by 2 mounted on top of the desk; The rare ornaments that are mounted to the base of the valve and as a "chute" extending to the style, and; The ornament on the center of the upper side which ends on the back.

"Estampille" claim
Because of the typical composition and quality of the marquetry on the inside of this secretaire and the exclusive gilt bronze ornamentation, this secretaire en pente can be attributed to Jean-Pierre Latz.

Jean-Pierre Latz (circa 1691-4 August 1754)
Latz was born near Cologne and moved to Paris in 1719. He acquired French nationality in 1736 and married three years later with the daughter of the successful entrepreneur La Coguette. This marriage gives him a dowry of £ 10,000 and many relationships within the high nobility. Thus, the abbesses, the Bourbon-Condé and Anne de Rohan witness at his marriage. In fact the road was paved for a royal clientele.
Latz acquires the license " ébéniste priviligié du Roi " in 1741, which gives him the opportunity to practice the profession of carpenter without being registered as "maître ébéniste". He settled in the Faubourg Saint-Antoine. Latz dies in 1754. His widow continues the studio until her death in 1756.
During the 1740s his production increases steadily. He supplies it,  whether through marchands-merciers, to a wealthy clientele, including several royal houses,  throughout Europe; King Frederic II of Prussia, King of Poland and elector of Saxony August III, Duchess Louise-Elisabeth of Parma - the eldest daughter of Louis XV - and indeed the entire French royal family through Antoine Gaudecour, Ebeniste of the "Garde-Meuble de la Couronne ".
It is very likely that, in honor of the marriage of the Dauphin with the Infanta d'Espagne, Latz  delivered furniture to Versailles.  A chest of drawers with floral marquetry on rose wood - very exceptionally - stamped: IP LATZ and W, the brand of the château de Versailles that is currently in a Belgian private collection.
On his death an inventory was made. 170 clock cases were reported, including a régulateur de parquet for the King of Prussia Friedrich II.
In spite of the relatively limited number of stamped furniture with the sophisticated rocaille style and unique high quality marquetry and bronze fixtures, Latz furniture can measure up to the level of Bernard II Van Risenburg (BVRB), noting that LATZ originality and variety should be even higher estimated. LATZ was also the only Ebenist in the Louis XV era who had a mainly international and royal clientele, thanks to the exceptional quality and originality of his work. 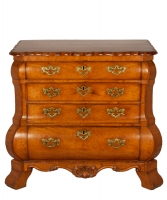 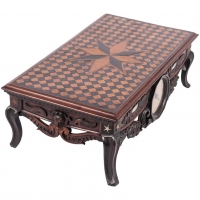