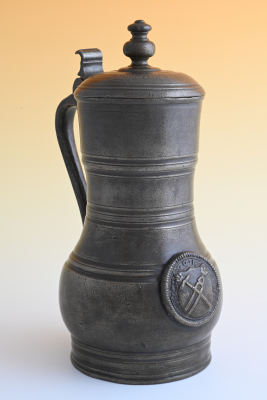 A pewter guild jug with two-headed hinge and hooked thumb rest.
With turret on the lid.
Engraved on the lid: PITER ANTONI MONOT ANNO 1766.
The medallion on the belly: a crowned hammer and tongs is not engraved but cast,
from the blacksmiths' guild.
And profiled turning rings on the jug.
Marked on the inside of the lid: rose mark with initials H.N.K. of the caster.
Height 25 cm.
This type of guild jugs were made in Nijmegen,
mostly in the 18th century and are very rare.
There are about 28 known jugs, some of which are in private hands.
Most of the jugs are in the museum in Nijmegen.

A pair of French tazze