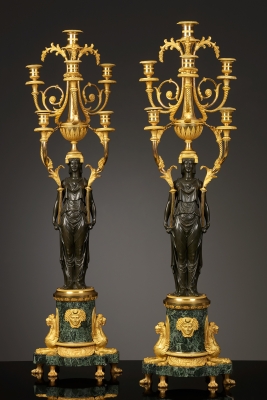 A very impressive pair of six-light candelabra. On a green marble base, that is carried by six lions feet and decorated with sphynxes in the shape of winged lions and elegant drapes with tassels and a floral basket and a portrait of the goddess Artemis stand elegant female statues.

The women in classical ancient attire carry a branch in each hand that fans out in shapes of Acanthus leaves and ends in candleholders.
From the branches a torched shoot rises up and ends in the head of a mythical creature. With their beaks the creatures hold an urn that stands on the head of the figure. From the top of the urn ornamented branches end in three candleholders. A sixth candleholders is positioned at the top.

Although no comparable specimen of this design are known, we can circumspectly attribute these candelabra to Thomire, based on their elegance, quality and refinement

An identical pair can be found in the green dining room of the first appartment at the Catharina Palace, Tsarskoye Selo in Russia. A pair of Russian Empire candlesticks