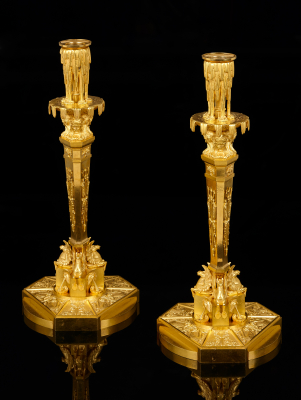 A magnificent pair of exceptionally detailed Russian Empire candlesticks. The overall design displays extraordinary artistic craftsmanship. The candlesticks each consist of 32 assembled parts that are all chased and executed to perfect finesse.
The rounded wings attached to the hexagonal base give the illusion of a round shape. The base itself is alternately decorated with stylised fountains and mirrored swans, each with a snake in its mouth.

The curved triangular socle with grotesque masks spouting into small shell-shaped basins below. The base is topped by three Hippocampus figures, their wings seemingly supporting the sheathed shaft embellished with mounted tridents and rudders. The shaft is crowned by three Poseidon heads that carry an overflowing ceremonial font into which watery cascades pour from the rim of the sconce above it.

Friedrich Bergenfeldt
The German born bronzier Friedrich Bergenfeldt (1760-1822) established his career in Saint Petersburg during the last decade of the eighteenth century. However, he was most likely temporarily active in Paris just before the turn of the century, where he may well have come into contact with the famous Parisian bronzier Claude Galle (1759-1815). Following his return to Saint Petersburg, his work after 1801 shows unmistakable similarities to that of Galle. The supreme quality of his production and craftmanship far surpasses that of the average bronzier active in Russia at the time. For this reason, Bergenfeldt was in high demand at the Russian imperial court and within the highest circles of Russia’s aristocracy. Although Bergenfeldt was the most celebrated bronzier from 1801 onwards, his active period was relatively brief, already coming to a halt in 1807. The reason for this is not known.

Apart from candlesticks, chandeliers and decorative vases, Bergenfeldt also supplied workshops with individual mounts and appliqués for furniture. One of his well-known clients was the atelier of Heinrich Gambs (1764-1831), a long-established and renowned furniture maker in Saint Petersburg at the time.

Very characteristic of Bergenfeldt’s work is the repetition of motifs relating to the element of  water. This pair of candlesticks features cascading water from the rims, for example. His decorative repertoire further included spraying fountains, Poseidon busts and heads, the sea god’s attribute the trident, his son Pegasus, hippocampi and fountains flanked by swans. They can be traced back to design drawings of vases and other decorative objects. It is generally assumed that they were drafted by Thomas de Thomon (1760-1813). The Swiss native De Thomon was active as a designer, painter and engraver, but is best known for his architectural designs of structures such as the (former) Stock Exchange building in Saint Petersburg and the Rostral Columns on Vasilievsky Island in the River Neva. These monumental Doric columns feature four sculptures of allegorical figures at their base, representing the main rivers of Russia. These rivers played a major role in the country’s flourishing trade and the recurring motifs of water can therefore be interpreted as symbols of prosperity, wealth and abundance.

The style of the decorative program of these candlesticks is closely related to the motifs of an ornamental vase signed ‘F. Bergenfeldt A St Petersburg 1802’, which was made for Count Stroganoff. Also, an exquisite pair of vases, comparable in style, was part of Count Bobrinsky’s collection in Saint Petersburg until the beginning of the twentieth century.

Baron de Baye
These candlesticks were acquired in the early twentieth century by the Baron de Baye. In order to understand how a French Baron became the owner of this pair of Russian candlesticks, we will take a closer look at this intriguing man.
Amour Auguste Louis Joseph Berthelot, Joseph Baron de Baye, was born as the son of Auguste de Baye and the British Georgina Wilkinson on 31 January 1853 in Paris. They lived in a grand apartment on the rue Boissy-d’Anglas. The aristocratic De Baye family owned a castle in the town of Baye, between Epernay and Sézanne in the Marne. Joseph de Baye was married to Marie-Béatrice Oppenheim Baronesse de Chabert, with whom he had two daughters.

From an early age, Baron de Baye, was fascinated by archaeology, an interest revealed to him during hunting trips with his father. In 1873, he received his first assignment from the French government, namely to carry out archaeological excavations in the Baye area. This marked the beginning of a long series of excavation campaigns in France and around Europe, the results of which he presented in the journal L’Archéologie préhistorique in 1880. The Baron de Baye organised exhibitions and published his theories and findings in articles and pamphlets, illustrated with his own drawings. He also erected a museum free of charge in a wing of his chateau. Although the scientific and academic communities of the time were initially interested in the baron’s research, they eventually questioned his working methods and conclusions.
In 1890, Joseph Baron de Baye attended an archaeological congress in Moscow. His time there triggered a unquenchable passion for Russia and its people. Every year from 1892 onwards, he would go on archaeological, ethnographic and historical missions to different regions of the Russian empire. He travelled through the Caucasus, the Volga region and even ventured off to Siberia for research. He was greatly interested in the history and way of life of the indigenous people. He collected objects and documents and vigilantly took notes on his random finds. The baron de Baye was even responsible for the photography himself and also shot numerous portraits. By doing so, he immortalised a culture that was doomed to disappear in the face of colonisation and industrial development. His findings were acknowledged by the scientific community of Russia and Baron de Baye became a member of the Imperial Historical Museum in Moscow in 1897.

A year before, in May of 1896, the baron had attended the coronation of Tsar Nicholas II. He took advantage of this occasion and collected numerous objects and papers especially made for this historical event and handed them over to the museum and library of Reims.
At the turn of the century, he was again sent on a mission to the Russian Empire by the French Ministry. This time, he was requested to collect pottery. After his return to Paris, he gave lectures and published his information on archaeological and ethnographic treasures in an article with the title ‘Souvenirs d’une mission en Abkhazie, en Crimée, en Géorgie, en Lituanie, en Nouvelle Flussie, en Petite Russie’.

The Baron de Baye donated numerous objects he had accumulated in Russia to the Musée Guimet in Paris while the city’s Musée de Sèvres were gifted more than five hundred pieces of Russian folk pottery. By 1905 he had already passed on his French archaeological finds to the museum in Epernay. International organisations also benefitted from his collector mania. For instance, the British Museum purchased various Russian archaeological treasures from the baron.

In July 1914, Baron de Baye left for Petrograd (the name for Saint Petersburg from 1914 until 1924) to attend the French President Raymond Poincaré’s visit there. The outbreak of the First World War subsequently forced him to remain in Russia. He was still there when the February Revolution broke out in 1917. Aware of the historical significance of events, he collected pamphlets, military orders and even removed posters from walls to send them to France. Due to his many contacts with important dignitaries of the Russian empire, he was imprisoned twice during this period. He was not released until 1920, after the intervention of Natalia Sedova, Lev Trotsky’s second wife, who pleaded for his release because of his frail health. Upon his return to France, the baron found his castle, and museum, looted by the German troops of the First World War.
In 1928, after the death of his wife Marie-Béatrice Baroness de Baye, the baron decided to offer a large part of his art collection for sale. Thus, on 19 May 1930, his furniture, paintings, bronzes and porcelain went under the hammer in Paris at an auction held in his wife’s name. In addition to these two candlesticks, which were auctioned under lot 49, Thomire’s exquisite chandelier, now in the Musée Marmottan, was also sold from the collection. Joseph Baron de Baye died on 30 May 1931 in Paris, anonymous and financially ruined.

Although little remembered in France today, the baron was a figure of importance in his time. For example, he was elected president of the Société des Antiquaires de France in 1906, he was a member of the National Commission for Historical Monuments, an honorary member of the Académie de Reims and of more than twenty Russian scholarly societies. He also received numerous international honorary decorations, of which those of the Grand Cross of the Order of St. Stanislaus of Russia and Commander of the Order of St. Anne of Russia are significant in light of his Russian contacts. In 1921, Joseph Baron de Baye was appointed Chevalier de la Légion d’Honneur.


Russian Empire Style
At the end of the eighteenth century and during the first quarter of the nineteenth century, the French style was tremendously popular in the decorative arts and was widely represented in all of Europe. The market for typically French gilt bronzes grew to such heights that numerous bronziers from Paris established workshops in important European cities such as Berlin, Warsaw, Stockholm and Munich. The wealthy Russian nobility had a strong preference for the French style yet it was impossible for French bronziers to gain a foothold in Russia. This was due to the restrictions under Paul I, which dictated that French nationals were not permitted to work in Russia. As a result of this, the majority of the bronziers in Russia had a German or Swedish background. And, despite the absence of French bronziers in Russia, there was high demand for gilt bronze from France. Because of the high import taxes on objects from France, the prices rose tremendously. This triggered a bustling black market, with traffickers smuggling bronze art objects from France over the border.

Czar Alexander I, who ascended the throne in 1801, intensified the regulations on French smuggled goods, and took action by supporting domestic bronze workshops with stimulating subsidies. This led to the creation of a number of new workshops in which bronziers were given the financial and artistic opportunity to develop. However, most of these “start-ups” were short-lived, which was partly due to the manner in which work was conducted in the Russian studios. Hardly any design drawings or sketches were made, which meant that there no well-defined structure to follow for the bronziers.

An key exception was the bronzier A.N. Voronikhin (1759-1814), who was trained in France and was very familiar with the French style. The clear and steady style of his many designs and model drawings gave the Russian bronziers a firm grip and thus formed the basis for the development of the Russian Empire Style.

The Swiss bronzier Pierre Marie Louis Agis (1752-1828) was also of great influence, despite his very brief career with the State Stroganov Bronze Factory. He worked at the factory for less than a year but when he left, the State of Russia acquired all of his sketches, moulds and other creations and models, so that his artistic influence could be continued for years to come. A protégé of Count Stroganoff, A.F. Bestuzhev ran the factory until 1810. In that year, Agis returned to the State Stroganov Bronze Factory until it fell into bankruptcy in 1812.

A third successful bronzier who had a great influence on the Russian Empire Style was Friedrich Bergenfeldt (1760-1822), a German native who was active in Saint Petersburg. He is also known to have drafted his own designs. Bergenfeldt's designs and his high-quality bronzes distinctly display the influence of Claude Galle (1759-1815), leading us to believe that Bergenfeldt must have had close contacts with the French bronzier Galle. Thomas de Thomon (1760-1813), the French-trained architect working in the same city was also a major influence on Bergenfeldt's work

A pair of French late Empire candlesticks, around 1810