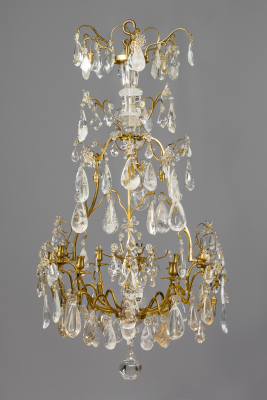 Typical 18th century style characteristics can be found in the construction, such as the dots on the arms wich correspond with the receiver plates, and the à coquille casted and welded candle holders.

Only the best quality of rock crystal was used fort his chandelier. The crystal was found in the Alpes and cut in Milan, wich had been the centre fort he production of luxury rock crystal since centuries. As rock crystal was a delicate and precious material, these chandeliers where seen as status symbols, and were found in royal European courts. Resembling examples can be found in Versailles, Potsdam and London.

A pair of fire-gilded and patinated French Empire four-light... 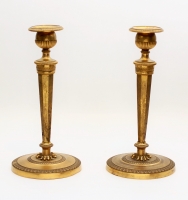