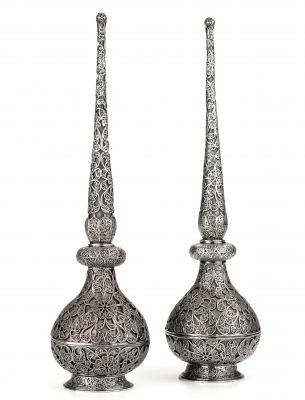 Because these bottles had to contain a liquid the silver filigree was mounted as decoration to the silver bottles. Rosewater sprinkling originally was an Iranian custom observed during the festival of Ab Pasthan to invoke the memory of rainfall that put an end to famine. As the tradition of rosewater sprinkling spread to India and further to South East Asia and was adopted by the Portuguese, Dutch and English, it became more common. It was used to sprinkle the hands of a wedding couple and generally to welcome guests. Today it is not unusual to be sprinkled over the hands when leaving a restaurant, from the Arab world to South East Asia.