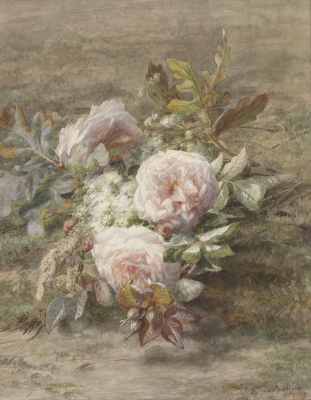 Gerardine van de Sande Bakhuyzen appears to be pioneering on an artistic level; she is one of the first painters to break with the traditions of the classical still lifes. Although her early work is clearly inspired by them, with opulent and primarily arranged floral pieces, she later seeks a more unconstrained composition. It must be said however that these classic works already demonstrate great artistic talent. Along the way, the classic vase makes way for a marble plinth and Gerardine later positions her flowers on ordinary woodland. Her brush strokes become looser, more daring. Later in life, she even made some almost impressionist pieces, which are remarkable due to their wonderful transitions from light and colour.

In 1861 Gerardine van de Sande Bakhuyzen was entitled honorary membership of the royal Academy of Amsterdam. She was co-founder of the Hollandsche Teekenmaatschappij in 1876 and joined Arti et Amicitiae in 1879 (two of the most important artist societies in the Netherlands). Furthermore, she exhibited regularly at the Exhibitions of Living Masters and won serval prizes. At the height of her fame she demanded – and received – high prices for her paintings. She negotiated with her clients independently and without any male intervention, which was very unusual at that time. Nonetheless, she gradually commanded great respect from her male colleagues with the high quality and innovative character of her work. This also appears from the fact that the great masters of her time, Jozef Israëls and Hendrik Willem Mesdag spoke at her funeral.

This watercolor with stunning light and color shows us her amazing talent. 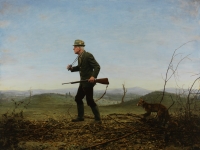