Jan Sluijters’ work is considered to be of great importance to Dutch art history. He played a pioneering role in the young avant-garde, which also included artists such as Piet Mondriaan and Leo Gestel. From his time at the academy until shortly after the First World War, Sluijters experimented frequently and adopted styles such as luminism, fauvism, cubism and expressionism. After this he gained fame as a painter of portraits, nudes, flower still lifes and domestic scenes in a moderate expressionist style.
As befits a modern artist at the beginning of the twentieth century, Sluijters made a trip with Leo Gestel in January 1904 to Belgium and France, where they visited various museums. In that year, Sluijters won the prestigious Prix de Rome with a large academic painting. Shortly afterwards, when he became acquainted with French avant-garde art, his painting style developed into a modern style. Despite the fact that Sluijters surrendered to modern shapes and colours, he always maintained a penchant for realism: the visible reality always remained the starting point for his work.

The female nude is a large part of Sluijters’ oeuvre. Journalists asked him why he painted so many women. In 1941 he replied: ‘More can be made of a woman. You can leave them on a couch and wrap a colored cloth around. A woman is by nature already: Adornment. A man must be hard and bony – a woman beautiful…”

In 1927 an interviewer asked him about the influence of women and the eroticism on his work. He replied: “If I sometimes show something of her body—a breast—it is because I like such a shape, just as I like a flower. Then there’s nothing perverse in that.” 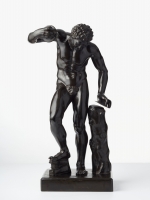