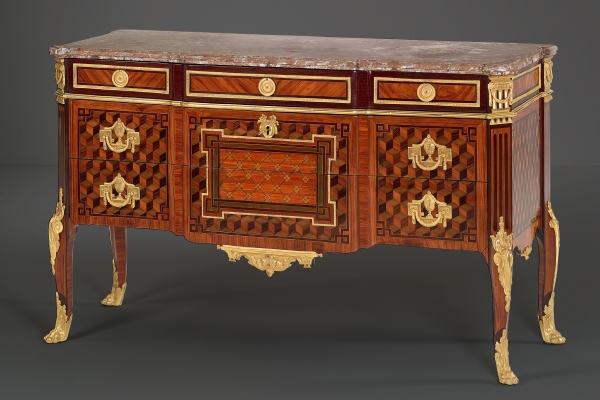 This commode was, as can be derived from the inscription “M. Le Dauphin”, initially owned by the French court. Louis-Auguste, Duc de Berry, grand-son of Louis XV, was since the decease of his father in 1765 “Dauphin de France” and was crowned King Louis XVI in 1774. On 26 March 1766 Pierre Harry Mewesen was registered as Maître-ébéniste with the Parisian guild of furniture makers. This entitled him to stamp his work. With these to dates we can rather confidently date this commode between 1766 and 1774.
The elegant commode with a protruding center part has two drawers over the full width. In the frieze it has three small drawers. The diagonally placed corner posts are decorated with faux glyphs. The legs have a typical ‘Transition’-design. The geometrical patterns on the panels on the front and sides consist of cubes of tulipwood, amaranth, and bois teinté in frames of amaranth and violetwood. The center part of the front is a rectangular panel framed in a triple rim of amaranth and gilt bronze. The panel is decorated with a trellis pattern with quadrifoil shapes on the intersections.

The fire-gilt bronze fittings are of impeccable quality. The fittings for the lower part of the commode – the sabots, chutes and the decoration for the skirt – are mainly decorated with leaf motifs. The sabots end in elegant four-toed lions claws. The backplates of the handles of the large drawers are decorated with a meandering background and ornamental vases. The grips are laurel garlands hinging in rosettes. The oval escutcheon is topped with a bow. The handles of the three smaller drawers are rosettes with a ring. The corner fittings are shaped like entablatures with architraves and cornices, decorated with a hanging garland. The lower part of the frieze – under the small drawers – is fitted with a gilt bronze rim.

From an inventory of 1787 listing the furniture of the Château de Fontainebleau we can deduce that the commode from the bedroom of the Countess d’Artois – an aunt of Louis XVI – was one of a pair. The, nearly identical, counterpart was made by Adrien Delorme. This commode was only 140 cm wide and its current whereabouts are unknown.
Delorme used the rectangular panel with the trellis pattern and quadrifoil decorations on a regular basis on furniture with geometrical parquetry, and was always framed in a triple rim. Delorme was not only maître-ébéniste but also marchand-mercier. It is likely that he gave the commission to Mewesen to produce a copy of the commode he made himself to sell them as a pair to the Dauphin de France.

Goblet with the crowned arms of the Stadholder Prince Willem... 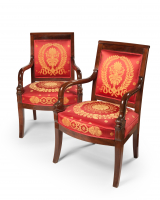 A Pair of Empire Armchairs