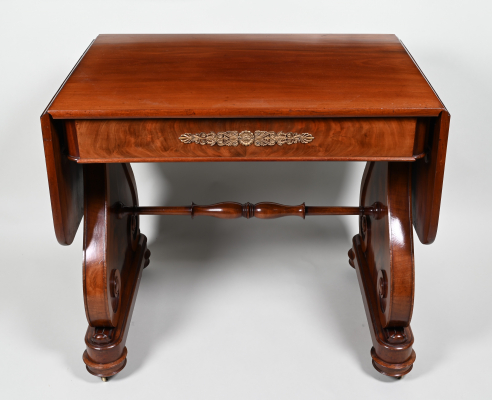 Fine George IV  Mahogany Center Table, in the Manner of C. H. Tatham
Charles Heathcote Tatham (1777-1842) was a British architect who at the age of nineteen was employed in the office of Henry Holland, the Price of Wales' architect. With encouragement and financial help from Holland, Charles left for Italy in 1794, spending time in Rome and Turin as a student of classical architecture. Amongst his friends during this period were Canova, Angelica Kauffman, Sir William Hamilton and Howard, fifth Earl of Carlisle, whose friendship and patronage contributed to his future success. On his travels he collected a number of antique architectural and decorative fragments on behalf of Henry Holland and these, together with his numerous architectural drawings, are now in the Soane Museum. A number of these drawings, including that for the present table, were included in his publication of 1799, a second edition appearing in 1803.
The design for this table is closely based on a plate illustrating 'A Roman table with paw feet and bowed legs' from C.H. Tatham's Etchings Representing the Best Examples of Ancient Ornamental Architecture drawn from the Originals in Rome and Other Parts of Italy during the years 1794, and 1796, first published in 1799.
C.H. Tatham was the brother of Thomas Tatham, one of the principals of the noted Royal Cabinetmakers Marsh and Tatham of Mount Street, Grosvenor Square, London.
Dimension table top unfolded: 149 cm

A pair of ormolu and patineted oil lamps 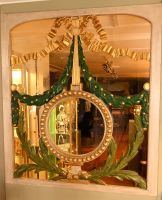 Wooden window above an exterior door