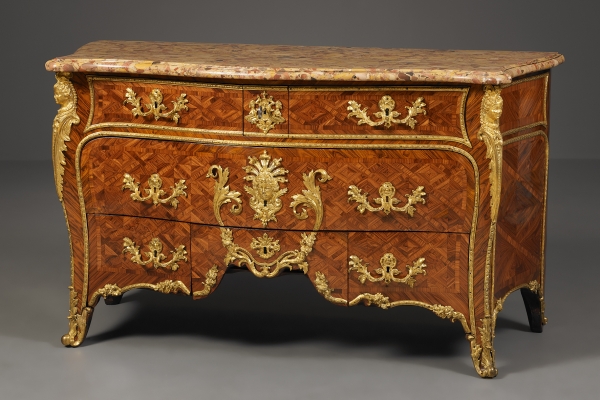 The commode has a curved shape at the front, as well as at the sides. The equally curved jambs rest on small curved legs. The middle part of the skirt has been deepened in the form of an arch. This is where the “Commode à Pont” gets its name from.

The walnut drawers are decorated with veneer in geometrical diamond motifs. The sides and jambs have contrasting geometric fan shapes in violet wood.

The commode is richly decorated with gilt bronze mounts. The drawers are framed with trimmings that support the overall structure perfectly. The front is decorated with a feathered mascaron in a cartouche of foliate motifs, reminiscent of the work of André Charles Boulle.

Etienne Doirat (ca. 1675-1732)
Doirat was probably born around 1675-1680 and lived after his marriage in 1704  in the Grande Rue du Faubourg Saint-Antoine. In 1726 he moved to the entrance of the Faubourg Saint-Antoine near the Bastille.
On his death in 1732 his studio had eleven employees. The inventory mentioned no fewer than 200 pieces of furniture, finished or unfinished, including commodes, bureaux-plats and bookcases, but also ‘sécretaires en pentes’ entirely to the taste of the time. The style and quality of Doirats’ furniture  equals that of André Charles Boulle in both structure and finishing, as well as in the application of bronze ornaments. This style precedes similar furniture by Charles Cressent (1685-1768).
According to the inventory that is drawn up after the death of Doirat, his stock contained many models in lead, rough castings, and unfinished workpieces, to serve as bronze decorations for his furniture. This proves that Doirat kept his bronze models exclusively to himself.
Doirat was one of the few cabinet makers who stamped his name on his work far before this was mandated by the Jurande of Menuisiers-Ebénistes in 1743. This obligation was ratified by the king in 1751. The audit by the "Jurande" served not only tax purposes, but was also a means of quality control with regard to reliability and flaws in the materials used. All of this had to be perfect before the "JME"-brand was applied.

This commode is made by DOIRAT, but probably, because it also bears the stamp of LSP, traded by his son in law Louis Simon Painsun. Painsun was admitted in 1730 as maître, but there is no known work of his hand. He worked in the studio of Doirat, which he took over after his death. He mainly delivered to MIGEON, which explains the third stamp on this commode. The commode also carries the ink-written name of Migeon on the wooden frame. 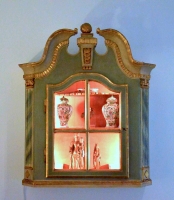 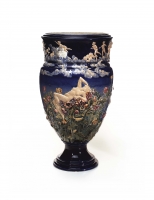 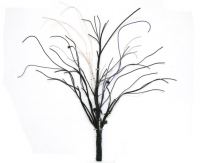